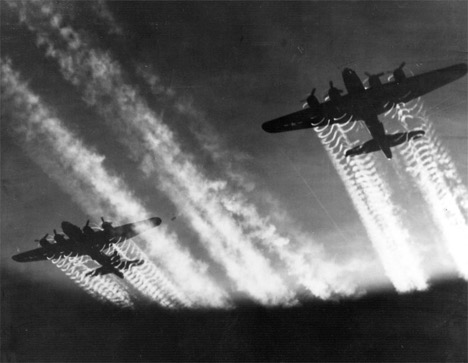 As soon as I became of age to join, I took a bus to Louisville to join the Army Air Corps, as it was called back then, but the day I arrived the office was closed. As I stood there in the front of the office deciding my next move, some Navy recruiters tried their best to get me to join the Navy, but I told them no thanks and that I had my heart set on enlisting in the Air Force and only the Air Force. My next step was to go down to Nashville, which I did during the last week of June 1942 and was able to enlist into the Air Force but being so close to the fourth of July, I was told to go home and return after the fourth. On the fifth, I showed back up and was sent for my basic training to Camp Forrest, Tennessee before being sent to my first school in Biloxi, Mississippi. By September of that same year, I had finished and was on my way to Santa Ana, California for my pre-flight school.

Following the next two schools I was endeared to Wesley Huckins, who would be my pilot. West, as I called him, was a guy from the Midwest and had named our plane by the time I had arrived. He named our B-17 “The Squirming Squaw.” Our group of B-17s was to be the last group to fly over the north Atlantic route due to the weather. Our last stop before flying on over was Gander, Newfoundland where we spent the night. The following day during takeoff, one of the planes crashed into the side of the mountain, killing the crew. The eight-hour flight over the Atlantic was rough due to the weather and our navigator had a hard time keeping us on course. We had also run into a lot of icy conditions, which caused ice to build up on our wings.During the last hours of our flight, we thought we were off course and had gotten lost so it was decided to drop below the clouds only to find out we were over Ireland. We landed at Rattlesden Base, England and it was from there that we would fight our missions from and call home. The base had been an old RAF base and the women who were in the RAF had used the building we were assigned to sleep in. The building was constructed of concrete and I remember having to put my raingear over my bed to keep me dry. Water from the ceiling would drip onto the beds. Each room housed four officers made up from two different planes. Our two roommates, along with their crew, were killed later on during a takeoff. All of our crews were assigned to these metal huts on the base. When we first got to the base, the base’s crew hadn’t arrived so the plane’s crew had to do KP duty until the base’s crews had gotten there. After we were settled in and they weren’t on KP duty, we would spend as much time as we could removing the paint from the outside of our plane. Doing this, we hoped to get a little faster air speed out of the plane. It wasn’t until after we had flown some missions that we learned the German fighters went after the shiny planes first so it wasn’t long before we had to change, so we flew the plane to a base in Northern Ireland where they repainted it. Also, when we first arrived our first wing commander was none other than Curtis Lemay. After we had flown a number of practice flights over England, we prepared to make our first mission. The days started at different times due to the targets. Some missions called for us to be woken earlier than others. CQ would send a guy around to wake us between three and four in the morning for the mission. You would get up and dress and head on down to the mess hall to eat. The days you were flying, you had fresh eggs and meat. None of that powered stuff. We would finish as quickly as we could and head on over to the briefing room. It was then that we’d learn the day’s mission and what group we would be flying in, time of take off and who would be flying the lead plane. After everyone was in the plane, the co-pilot and I started our pre-flight check while the crew made sure things were all right in the back. After getting lined up, each group waited for its colored flare to be fired and after you saw it, you took off. 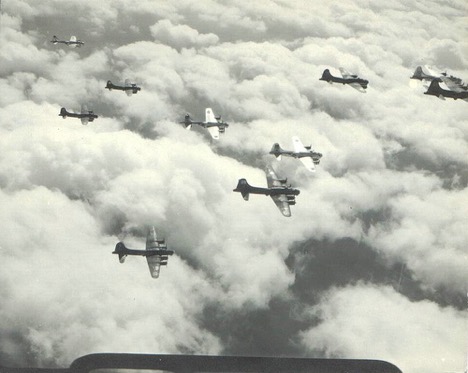 After getting airborne, we would climb to 3,000 or 4,000 feet as we circled the base. Flying that high and providing the skies were clear, you could see the other bases in the area and their groups taking off and forming up over their bases. After the planes had formed up in their groups we made our way over the Channel, climbing to 20,000 feet, but even then the German 88s could cut through the bomber groups as they flew over the coast of France.

Our first mission came on Friday, December 31st 1943 and the target was Cognac airfield in France. That morning started at 2:30 and we were in the briefing room by 3:00 and were told it would be a milk run, but it turned out to be anything but that. Take off was to have been at 7:30 but it wasn’t until 8:00 that we got in the air. That day we were dropping our bombs in the wind and with the headwind we ran into, our air speed was cut back which made us an easy target for the German 88 flak guns on the ground. It wasn’t until we had passed through all the flak that we learned some of the planes in the second group were missing. One was Lt. Moore who, after dropping his bombs, had pulled away in flames after being hit by flak and spun down and broke up. Only five chutes were reported. After pulling away from the target, it was the fighters’ turn at us and as one came by my tail gunner, I heard him say, “that SOB just shot off my gun sight!” Most of the time, the fighters would come up from behind due to less gun fire from the B17s. 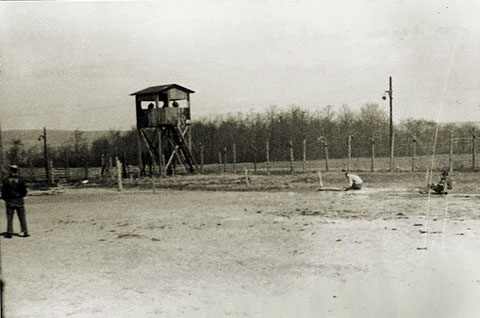 As we fought with the hatch I asked if he was sure about the bombardier. As we fought with the hatch the navigator was yelling, “Come on, come on!” and it was then the fear of not getting out alive set in and as it did, I ran head long into the hatch with my head and as I hit it, the door flew open and out I went. As I fell, I was on my back looking up watching for chutes and all at once I realized I had clipped my chute to my halter. Just as I clipped it and opened my chute, our plane exploded, which was still over me, sending part of it past me.

Once on the ground, I hooked up with some French resistance and was able to avoid being captured for a few weeks, when a Frenchman turned me over to the Gestapo. After a number of weeks of interrogations by the Gestapo, I was taken to Stalag Luft 1, where I remained until freedom came May of 1945.

(This Veteran’s World War II war stories are courtesy of the Witness to War Foundation, www.witnesstowar.org)