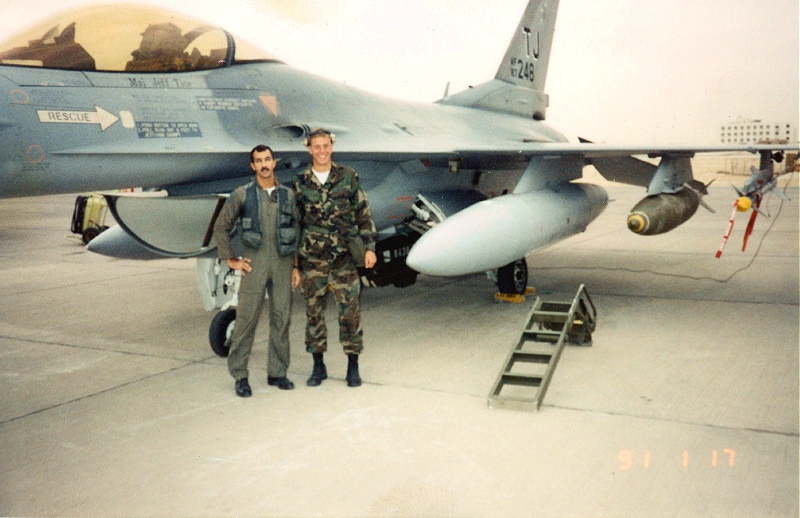 USAF Colonel Jeff Tice was captured after his F-16C aircraft was shot down over Iraq on 19 January 1991 and was held by the Iraqis as a Prisoner of War until his release on 6 March 1991. Here is his story:

So I … told them that I was in the … 614th fighter squadron, and they kept asking, well where were you from, where were you flying, what was your target … It was pretty obvious what my target was; it was burning still. And so … we went around about that for a little while, and they continued, intermittently, to beat me in the lower extremities, getting kicks, punches, whatever. And this went on for maybe 10-15 minutes, the question, answer, I call it show and tell … they’d show me how interested they were, and then I’d tell them a little bit. Finally they gave up for a little while and went back in the hall way to give a breather and get a break. It was, for roughly the next … 36 hours, I would say, it was 20 minutes on the hot seat, off for 20-30 or 40, 20 minutes back on the hot seat to answer questions back on and off.
…As we went further and further through this, they became more and more intent on finding out some pertinent information. But the majority of the questions they were asking could have been found in any publication that deals with aviation, like what does the F16 weigh, is it the a model, was it the b model, was it a c model. They wanted very, very specific details that really had no bearing on anything … else. So they continued to ask those questions, and I avoided answering them directly as much as possible. I would … ramble on about something that was absolutely nothing to do with what I was doing, and it didn’t take them long to figure that out, and it also didn’t take me long to figure out that … when then beat me, crying out was not a good thing because that focused a point of weakness and they began to hit harder in that area, so [I] started to begin to understand this game and just try not to cry out when I was hit. 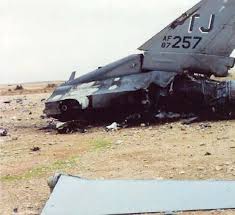 Q. One of the tricks that they learn is to find a spot where you cry out…
That’s right..

Q. What was the spot they worked out…
They … tended to focus on my left knee at the time; it was a former injury a long time ago, actually a soccer injury and football in your country and they focused on that knee cause it was a soft area and … it was very painful at that time.

Q. So what were they doing?
They were just kicking, slamming it, doing whatever they could at that point … my hands, since I had these handcuffs on now for the better part of 12-14 hours, they had completely … I had lost complete circulation in my … in my hands. And so every once in a while, … one of their two goons, … one was on either side of me, one of the two goons would … twist my wrist as hard as he could, you know, trying to get me to wince in pain, or whatever. So I was trying not to do anything, trying to maintain as much military bearing as possible, sitting as straight up as I can in a little metal stool, a little metal chair, pointing my face in the general direction of the interrogator and at least answering him and try to maintain as much dignity as I possible could, at that point in time. …As they began to be very interested in … some of the things, again … I thought they were really ridiculous kinds of questions that could be found on any aviation magazine, there was nothing specific about altitudes, something that would be tactically significant to them.
It became evident that these guys were not military men, they were some type of secret police, interrogators who really didn’t understand aviation very well. So I said, this is good for me, because I could tell a story and weave a web of truth through it that will prevent me from saying anything that might be harmful to the rest of the guys out there. So I … concocted a … story that had a web of truth through it, and they would be able to at least see some of that, so I kept coming back to that one, whenever they’d ask about aeroplanes and tactics and numbers, and who did what … I would fall back of that story.
After about 12 hours or so of this treatment, they stood me back up again, and walked back down the same hall way, and as I turned the corner to go into the same room again, someone hit me with something in the left hand side of my head. That was the first time I had been hit above the neck. And … immediately the stars and the little tweety birds appeared, and I thought, Oh! I’m going, I said, I’m going to go down… I … tried not to, but I could tell that he had ruptured my eardrum, just that fast, one strike to my ear and..and I could not hear out of my left ear, and I could feel the blood starting to run down the side of my face. I said, these guys are going to get serious about something now. And went back into the room, sat down in the chair and now the interrogator was obviously very agitated because I hadn’t been answering his questions. So he got very agitated with me and started yelling about, I’m going to kill you cause no one knows you are here, and all that stuff. And he started focusing on the fact that no one knew I was there. So then he offered me an opportunity to talk on video tape, and make a tape so that people would know I was there. I absolutely did not want to do that. So here’s an opportunity for propaganda. I’m not going to let myself on it, and I just kept refusing to put … myself on video tape. And now I understood why they were working below my neck, they did not want to ruin my facial features for on camera view. And they began a little more effort on my..on my lower extremities, and they were beating me pretty heavily; I kind of describe it like going … a couple of rounds with Mike Tyson, blindfolded and chained to a chair. And I was pummelled pretty heavily for… a while, and…

Q. Just a second.
Back in the hot seat for another show. Again we’re in the 36 hours or so, almost 48 hours since my shoot down, about 36 hours since I have been in Baghdad, I think. …I lost track of time. I was very careful at that point to have a feel for time, but it began to disintegrate. I couldn’t tell how long I had been on the ground or how long I had been in the hot seat, and … I was deteriorating rapidly. I don’t hurt too bad, I still had mental faculties, still had some power, I’m freezing in there, but I was..I was getting worn out. Back in the hot seat again, asked me the same sort of questions: would you make the video tape, would you do this, would you do that, no, no, no, I’m not interested, guys beat me again, below … the neck. Finally … one of the guys hauls off and hits me again in the jaw and dislocates my jaw a second time. Wow! now I’m really hurting, and I thought, oh this is really going to get bad, and he asked me if I wanted to make the tape now. I’m very much slumped over now; I’ve lost my composure to the point where I can’t hold my head up very well any more. And I said, well, what do you want me to say again. And … that was probably the wrong thing, cause he knew that I knew what he wanted me to say and he got pissed. And said something, … and the Iraqis, the guards put a wire round this ear right under my chin and … wrapped it around this ear…It obviously looked like some electrical devise. They were very interested in having me say something on their camera, and I was not interested in telling them anything or saying anything on camera. I told them quite a bit more than I wanted to at this point in time. I wasn’t interested in making this video tape.
So they turned on the juice. And what that did was … drive… your jaw together with violent force. All your muscles contract; my nose went to my chest and it felt like a … little lightening bolt hitting me right in the forehead. And there was a flash, and again it was momentarily in contact, a second on, and everything contracts in your body. And I started spitting out pieces of teeth. Oh, this is going to get fun. And it was pretty obvious that this was [a] way of wearing me down very, very quickly, because every muscle in your body tenses up. You don’t have any strength left. I am very tired now. Even my jaw has been dislocated, I’m not speaking well, I’m slurring, and … they did that for a little while, and we had a couple of question-answer periods, I don’t know how many shocks I got, 10, 12, over a period of time, 20, 30 minutes. And …

Q. They’re asking questions?
They’re asking questions and asking me to make the video tape; I’m still refusing … biding my time, telling stories, doing whatever I can think of at the time. Finally, he gets … mad; he says no one knows you are here; we’re going to kill you, right now. The guard on my right, who had been striking me with a pistol butt, I assume it’s a pistol butt, I could hear the unmistakable sound of the slide being drawn back and around being chambered. I thought, and he pressed the gun up against my temple, and I said, okay, here we go, and I thought to myself, okay, now’s not the time to be scared, because it is too late to be scared. So I was getting..I was angry now, believe it or not, anger just welled up inside of me … and I just pushed my head back against the gun to let him know that I was mad. And he didn’t like that at all. He just hauled off and pulled the gun back and just struck me across the … side of my face as hard as he could with the flat of the gun. And I fell … off the chair. And that made the interrogator mad. So he started yelling at … the torturer, and they sat me back up on the chair, put the wires back on, and we had another, I call it the ‘talk man’, we had another ‘talk man’ session with the electricity … trying to get me to make a tape. I’m exhausted now, I’m drenched in sweat and urine and everything else, and he finally says, “Look, we’ll let you talk to your wife and children. You are probably interested in them.” Now it is very attractive to me, and I said “Okay, I’ll make the tape”.