During eight years of imprisonment in North Vietnam, including three years of solitary confinement, Captain James Stockdale was a symbol of defiance, organizing the other POWs and refusing to serve as a tool for Vietnamese propaganda. 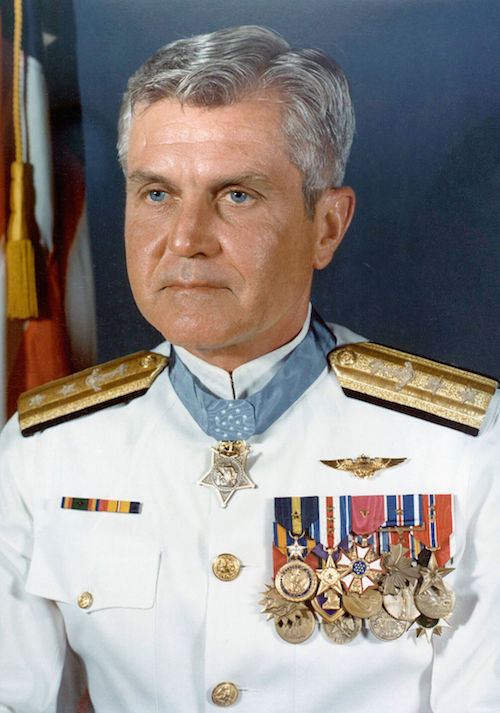 James Bond Stockdale (December 23, 1923 – July 5, 2005) was a United States Navy vice admiral and one of the most-highly decorated officers in the history of the U.S. Navy. 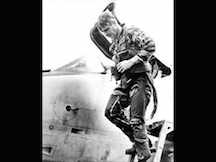 Stockdale led aerial attacks from the carrier USS Ticonderoga (CVA-14) during the 1964 Gulf of Tonkin Incident. On his next deployment, while Commander of Carrier Air Wing 16 aboard the carrier USS Oriskany (CV-34), he was shot down over enemy territory on September 9, 1965.

Stockdale was the highest-ranking naval officer held as a prisoner of war in Vietnam. He was awarded 26 personal combat decorations, including the Medal of Honor and four Silver Stars. During the late 1970s, he served as President of the Naval War College. Stockdale was held as a prisoner of war in the Hoa Lo prison for the next seven and a half years. As the senior Naval officer, he was one of the primary organizers of prisoner resistance. Tortured routinely and denied medical attention for the severely damaged leg he suffered during capture, Stockdale created and enforced a code of conduct for all prisoners which governed torture, secret communications, and behavior. In the summer of 1969, he was locked in leg irons in a bath stall and routinely tortured and beaten. When told by his captors that he was to be paraded in public, Stockdale slit his scalp with a razor to purposely disfigure himself so that his captors could not use him as propaganda. When they covered his head with a hat, he beat himself with a stool until his face was swollen beyond recognition. When Stockdale was discovered with information that could implicate his friends’ “black activities”, he slit his wrists so they could not torture him into confession. 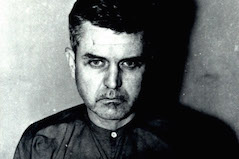 For conspicuous gallantry and intrepidity at the risk of his life above and beyond the call of duty while senior naval officer in the Prisoner of War camps of North Vietnam. Recognized by his captors as the leader in the Prisoners’ of War resistance to interrogation and in their refusal to participate in propaganda exploitation, Rear Adm. Stockdale was singled out for interrogation and attendant torture after he was detected in a covert communications attempt. Sensing the start of another purge, and aware that his earlier efforts at self-disfiguration to dissuade his captors from exploiting him for propaganda purposes had resulted in cruel and agonizing punishment, Rear Adm. Stockdale resolved to make himself a symbol of resistance regardless of personal sacrifice. He deliberately inflicted a near-mortal wound to his person in order to convince his captors of his willingness to give up his life rather than capitulate. He was subsequently discovered and revived by the North Vietnamese who, convinced of his indomitable spirit, abated in their employment of excessive harassment and torture toward all of the Prisoners of War. By his heroic action, at great peril to himself, he earned the everlasting gratitude of his fellow prisoners and of his country. Rear Adm. Stockdale’s valiant leadership and extraordinary courage in a hostile environment sustain and enhance the finest traditions of the U.S. Naval Service.

Admiral Stockdale was one of the best and most selfless leaders during his 7 years as a POW. Here are some great reads about him and his reflections on the Vietnam War